This has been brewing in my mind for several weeks, and the post that inspired me to bring LBF out of the cave in which it has been hiding for the last few years.

The Press (or as I like to call them – Pundits Rejecting Every Sensible Source) and the left are so bound up in their own hyperbole that they cannot see or even comprehend their own prejudices.

Back in December, I had a FB conversation with a stranger based upon comments left on a conservative writers’ site. It really brought home to me just how wrapped up they are in their own rhetoric, and that it’s danged (yes, good Southern expletive) near impossible for them to see beyond it.

The original post was detailing the 304 Electoral vote won by President Trump. So many ignorant discussions starting with “but he lost the popular vote by 2.8 million.”

I started by sharing a map created by Alex Egoshin called the “Clinton Archipelago” which shows precisely whence within the US the bulk of her votes came. 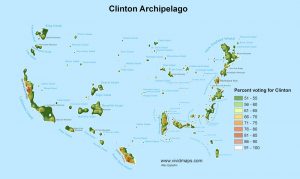 My comment accompanying the map was: “If you think we’re not the majority, you’d better look at a map. Based upon the geographic spread (which the electoral college was designed to protect) Trump voters FAR outweigh the Clinton Archipelago.”

Following are the screen snips (leaving out names – yes, it was a public forum, but I don’t feel that calling anyone out serves a good purpose; I felt that at least one of the persons in the thread was attempting to be reasonable in his arguments, flawed though they may have been.) At the very least, I was gratified that he “liked” my final comment, so perhaps something resonated. Truly, though, most are not this reasonable. (Right click to view readable image – back to finish reading post) 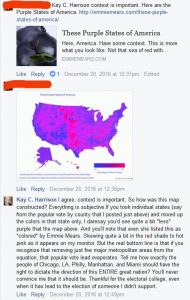 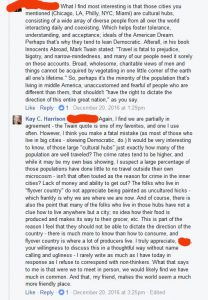 Sadly, the PRESS doesn’t seem to be “getting it” any faster than the left, and indeed are fomenting even more dissatisfaction among those who believe only what they hear from CNN, et al. The establishment republicans such as has been/never was John McCain and Lindsey Graham are little better than traitors. So entrenched and desirous of keeping their long-standing place at the government trough that they’ll do/say just about anything to keep their position.

Scroll back to top